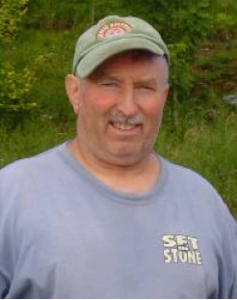 Gordon Wilton started farming when he left school. He worked on three farms where he was involved in maintenance work as well as general farming duties. It was during this time that he started walling, working alongside other farm employees maintaining the boundary and field walls. He was able to develop his skills to a high level simply by learning from the people around him. Gordon had no formal training himself and firmly believes that some people have a natural aptitude for walling. He knows however, that formal training is essential to help wallers improve their speed and technique.

As his skills improved, he found that he was being asked to do more and more walling work, mainly on farms, but then also landscape walling for gardens. He realised that he could make a living from his dry stone walling skills and set himself up as a self employed waller in 1984.

It was around this time that Gordon started to enter dry stone walling competitions and found that he was doing very well. He came third in his first attempt at the Grand Prix and then won the competition in 1993 and 1994. This prestigious event in the Dry Stone Walling Association calendar involves competitors travelling to the different walling counties in England, Scotland and Wales and competing in the different local styles. It requires the individual to be able to wall to a very high standard in all the different styles in the UK and understand the various stones.

Gordon also works with the artist and sculptor, Andy Goldsworthy and he has been travelling abroad with him every year, mainly to France and America to work on new commissions. In 2007 they completed an exhibition of Andy Goldsworthy’s work at the Yorkshire Sculpture Park which attracted 85,000 visitors in the summer alone.